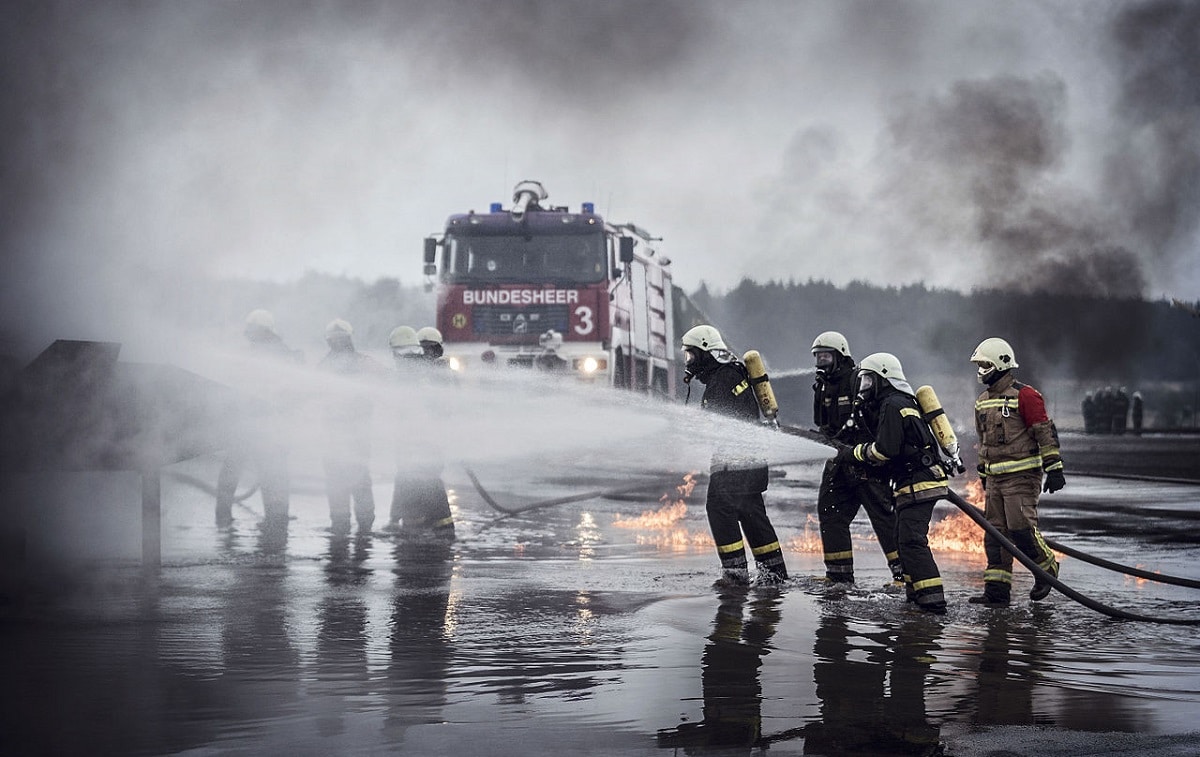 One aspect of the extensive firefighter employment process is the CPAT Firefighter test.

This article will tell you everything you need to know about the CPAT. We will also explain the best online resources to help you get ready for the CPAT firefighter test.

Being a firefighter is a risky and stressful job, so only the best and most fitting job candidate could actually become a firefighter. In order to do so, each candidate should excel on a couple of exams, interviews, and evaluations:

The rest of our article will mostly keep to the physical ability test or the CPAT. If you want to familiarize yourself with the psychological evaluation or the written exam, head over to Job Test Prep and their explanatory article and prep resources.

What Is the CPAT Test for Firefighters?

The CPAT test is an acronym for The Candidate Physical Ability Test, which contains a total of eight sub-tests. Each of these sub-tests will measure a different physical ability.

The CPAT is conducted as a sequence of physical events that you need to finish one after the other, following a determined path that will lead you from one event to another.

The CPAT test is made to make sure that all the candidates that go further in the employment process are actually physically able to perform some of the crucial and most important tasks during fire and firefighting scenarios.

The CPAT test isn’t given as part of the recruitment process, you just need the CPAT certificate if you do want to continue the hiring process as part of a firefighting station. So, you could take the test on your own initiative, and just include the certificate during the employment process.

The CPAT certificate is active and valid for a year after it was successfully finished, so make sure that your certificate is not older than 11 months at the time of filing an application. Also, it’s federally recognized, so you can have a CPAT certificate obtained in one state and used in another.

How Many Steps Are on the CPAT Test?

The CPAT test is done in a consecutive manner, where you don’t have a timed-out section for resting. So, you should be ready to finish the whole CPAT test in one go.

The 8 most common sub-categories on the CPAT firefighter test are: 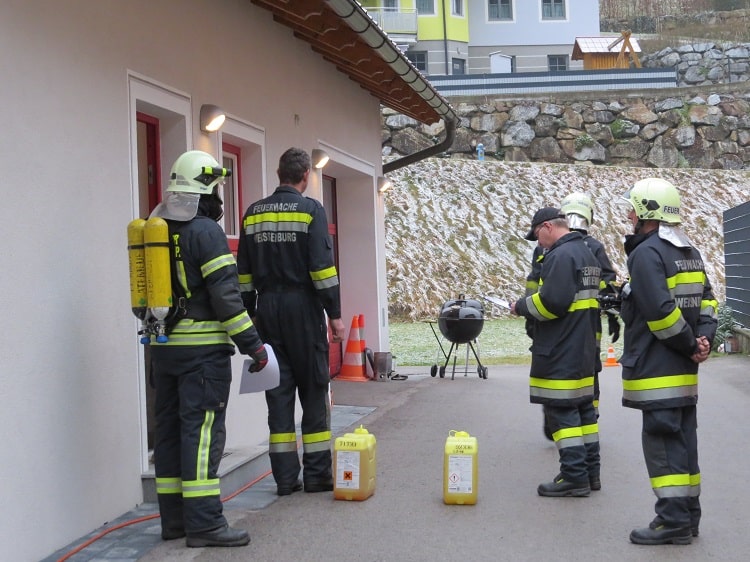 Working as a firefighter will require the crucial task of being able to climb stairs in protective clothing, with a hose bundle and additional firefighter equipment on you.

During this task of the CPAT test, you will have two 12.5 pounds (around 5.67 kg) of weights on your shoulders, imitating the equipment and hose bundle. Before the start of the task, you will have a warm-up session of 20 seconds on a StepMill on level 3 – a stepping rate of 50 steps per minute.

For the actual exercise (which comes right after the warm-up), the pace is raised to 60 steps per minute (i.e. level 4) for 3 minutes.

After those 3 minutes, the task is completed and the weights will be lifted from you. You continue walking for 85 feet (around 26 m) through a walkway that will bring you to the next task.

The next task is dragging in the hose. You need to drag an uncharged hose from the hydrant to the fire, while moving it through obstacles, without it unplugging.

You grab an automatic nozzle from a hose and place it on your shoulders or across your chest. Then, you need to drag the hose for 75 feet (around 23 m) toward a designated object. You will make a 90° turn around it and move for an additional 25 feet (something more than 7m.)

Once you reach a marked finish line, you need to drop on one knee and start pulling the hose line until you pull 50 feet (15m) of the hose through the finish line.

Once this exercise is done, you move through a path leading you to the next task.

One at a time, you need to remove two saws from a cabinet and place them on the ground. Then, you pick them up in each hand and walk 75 feet (almost 23m) around an obstacle object (most likely a drum) and back to the starting place.

Once there, you put the saws back in the same manner as you removed them. You walk another 85 feet (around 26 m) through a walkway and get to the next task of ladder manipulation.

This next task will require you to place a ladder on a fire structure and extend it to the desired level. Then, you also need to be able to lower the ladder back to its original height.

You walk to the top rung of the ladder, lift it from the ground, and secure it against a wall. This is done in a hand-over-hand manner, pushing one rung at a time, until the whole 24-foot (7.3m) ladder is vertically stationed. You are not allowed to use the side rails in order to raise the ladder.

From there, you move over in front of another already secured ladder to show your extending and retrieving abilities.

Standing in a marked square, you need to use a rope to raise the ladder to its full extension. Once done, you immediately continue to lower it down in its starting position. During the retrieval, you have to be sure that you control the rope and don’t let it slip.

With that, the task is completed and you follow the 85 feet path to the next task.

In this sub-test exercise, you need to prove your ability to open or breach an obstacle like a door or a wall.
With the help of a 10-pound (4.5kg) sledgehammer, you need to strike a measuring device in a marked area in order to push it all the way through. Once done, a buzzer will ring signaling that the task is over, and you can walk towards the next task.

The next task as part of the CPAT firefighter test will be searching for fire victims under restricted visibility and life-threatening conditions.

In order to successfully finish this task, you would need to crawl through a tunnel, on your hands and knees. The tunnel will have two 90° turns, a couple of different obstacles you need to cross, and a narrowed tunnel.

After searching for fire victims, the next task is their rescue. This task will test your ability to save a victim or an injured partner from a fire scene.

Once you successfully carry the mannequin, you continue to the next task.

Ceiling breaching and pulling will test your ability to pull down a ceiling to check for fire extension and damage.

The task consists of using a pike hole to push 60 lbs ceiling door three times and pulling an 80 lbs ceiling device five times. This 3-times push and 5-times pull are considered as one set, and you need to do a total of 4 sets.

Once done, the CPAT test is finished and you will hear the proctor calling out “time.” The CPAT is officially done after this exercise.

What Is the Average CPAT Time?

The maximum time you can take is 10 minutes and 20 seconds. The average time that candidates take is around 9 to 10 minutes. But, since the CPAT is a pass or fail type of test, taking less time doesn’t mean more points.

How Hard Is it to Pass the CPAT? 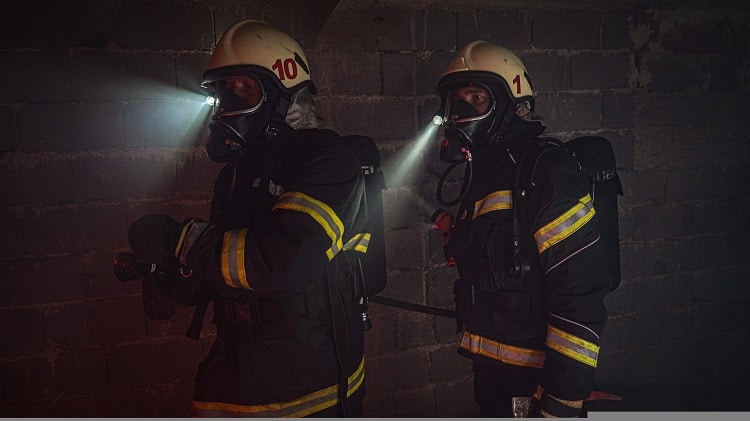 The CPAT firefighter test is somewhat hard to pass since it needs great physical and mental strength.

During the whole testing time, you will wear a 50 pounds vest (around 23 kg) to simulate the weight of protective clothing and breathing apparatus.

The best way to make sure that you finish the test in the given time frame is to prepare yourself by practicing each task before the actual CPAT test. Our next section will give you some tips.

How Do I Train for CPAT at Home?

The most effective way to train for the CPAT firefighter test is to dedicate a lot of time and effort to acquiring all the abilities that a firefighter should possess.

JobTest Prep is primarily dedicated to helping future firefighters pass the written and personality tests required as part of the firefighter hiring process. But, they actively work on making their Job Test Prep-exclusive practice test for the CPAT test.

Their practice materials will contain warm-ups, exercises, and training guides that can help future firefighters ready for their CPAT firefighter test.

Being a firefighter is very risky yet rewarding work. In order to do it, firefighters need to be in their best physical, emotional and mental state. The CPAT firefighter test is designed to measure the physical ability of future firefighters.

This is done through a set of 8 tasks that measure candidates’ readiness to operate different firefighting tools, search and rescue, and break doors and ceilings.

Job Test Prep is helping future firefighters ready themselves for the physical, emotional, and mental testing as part of the firefighter employment process.

Victoria (or Viki) is a Freelance Writer, Psychologist, and Gestalt Therapy Consultant. With years of experience in higher education as well as counselling others, she is well-placed to offer expert advice on guiding others up the career ladder.